For many insects crawling or flying around the planet, it can be very difficult to tell the difference between males and females. Most of the time that does not matter when it comes to identifying pests, however, mosquitoes are an exception. Female mosquitoes are the most dangerous sex when it comes to these flying, biting pests as they are the only ones that bite. Take a look below to learn more about all of the differences between male and female mosquitoes, so you can be prepared to eliminate them from your home and property.

While still tiny in comparison to other living creatures, female mosquitoes are typically larger than their male counterparts. Mosquitoes range in size from 2mm to 6mm in length, however, if you see two different sizes of mosquitoes buzzing around, it’s a safe bet to say the larger is female.

Both male and female mosquitoes have a mouthpart called a proboscis. On males, the proboscis is wider, branched, and has a feathery appearance which aids their hearing capabilities. On the other hand, females possess a proboscis that is much more needle-like in appearance, allowing it to pierce the skin of animals to access blood.

Female mosquito lifespans vary from species to species, but most typically live for one month. The lifecycle begins as females lay their eggs, up to 300 at once. Mosquitoes use water as breeding grounds and the eggs will remain there through the pupae phase. Once emerging as adults in as little as 4 days or as much as 2 weeks, mosquitoes are ready to breed only 2 days into adulthood.

Mosquitoes spend their entire lives near the habitat where they were born. However, some mosquitoes have been discovered traveling up to 20 miles away in search of blood, food, and water. 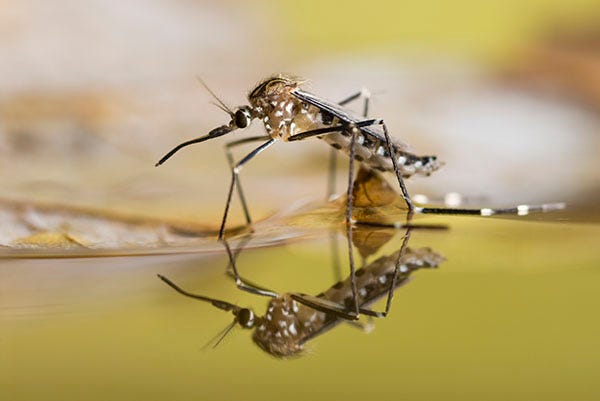 Behavior is where the differences between male and female mosquitoes become most apparent. Males lead lives that are solely concentrated on the essentials: water, food, shelter, and finding a mate. Male mosquitoes survive off of a diet consisting mainly of water and nectar. They use their antennae to hone in on the sounds females make with their wings when ready to mate.

Female mosquitoes lead slightly more complex lives, but they also require basic life essentials including water, food, shelter, and reproduction. Nectar and water are the main source of food and nutrients for female mosquitoes before they have mated. To attract a mate, females beat their wings up to 500 times per second to create a buzzing noise. Males can also create buzzing with their wings, but the sound is a lower pitch than their female counterparts.

Once the reproductive cycle kicks into action, females need to supplement their diet with much more protein to be able to lay eggs. In order to do this, females seek out blood from any animal they can find. To find their next meal of blood, mosquitoes track the scent of carbon dioxide which all animals exhale every time they breathe.

After mating, the female mosquitoes will find a patch of standing water where they will lay up to 300 eggs at one time. Once these eggs hatch, the females will be able to bite within two days after reaching aulthood and restart the entire process. Since female mosquitoes are the only mosquito to bite humans and other animals, they are the ones that transmit diseases and should concern you the most.

While male mosquitoes may seem to exist simply to keep the population of mosquitoes thriving worldwide, they may have an unexpected purpose that could help stop the spread of mosquito-borne illnesses. Several scientific studies are conducting experiments with male mosquitoes and the Wolbachia bacteria, which renders male mosquitoes sterile.

When released into the wild, these mosquitoes would compete with wild mosquitoes to mate with females. If successful, these sterile males would ensure that procreation would fail. As a result, mosquito populations could be greatly reduced and the chances of potentially fatal or debilitating diseases such as yellow fever, dengue, chikungunya, and zika virus, would be minimized.

Have a Good Mosquito Story?

Share it with us and our community on our Facebook page. We love to hear and see how you’ve been finding solutions for these pests! If you want to stay up to date with our latest sales, receive exclusive deals, and get updates on new articles and products, our e-newsletter will do that and more.